The drive up the Cape Leveque Road isn’t for the faint-hearted, but my gosh it’s bloody worth it. And so is a good bra.

Cape Leveque, the most well-known place on the Peninsula, is only 240km from Broome but it takes more than three hours to get there. You’ve got to concentrate on the drive because you don’t want to run over any bits and pieces that have been shaken off cars, trucks, trailers and boats ahead of you.

The first 100kms is red dirt, pindan, followed by 100km of bitumen. There are a couple of communities worth visiting on the way. Beagle Bay and Lombadina have incredible missionary histories and their churches have to be seen to be believed.

Cape Leveque is spectacular. It’s the northernmost tip of the Peninsula. Kooljaman is a wilderness camp that’s worth a visit. Facilities are pretty basic and can be expensive (I paid $130 for my beach shelter) . It can be really busy during the dry season but I’ve just had a glorious weekend there in November.

The east beach offers incredible swimming and snorkeling. If you squint you can see me! There are tides like no other in this part of the world. Nine metre tides aren’t uncommon. I was swimming at an almost-high tide. 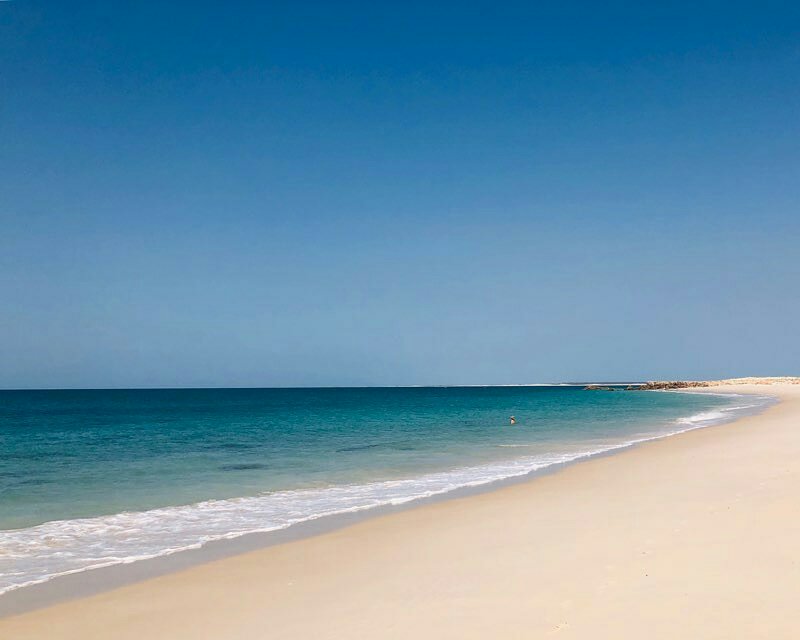 The west beach offers some awesome fishing (below is a gratuitous photo of the Hilux on the pindan – I just love it!). There’s sand on the other side of that pindan.

Now, it is the Kimberley after all. And while they don’t often mention crocodiles in the tourist brochures, they are around albeit infrequently.

I was chuffed to see evidence of a saltwater croc on my pre-dawn walk at the very location I was swimming at the day before. Yup! Croc tracks!

And check out the brilliant imprint he left behind after relaxing on the beach for a while. I estimated him to be about two metres. There’s a creek about 6km north of the beach so I’m assuming he lives in the mangroves there and just wanders from time to time.

THE PEOPLE YOU MEET

I meet great like-minded people on my travels and every now and again I meet someone who’s worth bragging about. Celebrity chef Curtis Stone is one of those. He was genuinely lovely and was very excited to share his passion for Western Australian produce with me, including some bush tucker that he and some local guides had collected at Kooljaman. He had lunch at Kooljaman and made a point of making his way to the kitchen to thank the young chef. That story made its way to ABC radio. Listen here to hear how over-the-moon the young chef was and how much Curtis was loving his trip north.

Curtis isn’t the only one who can cook up a feast! This is the breakfast I cooked from my beach shack overlooking the East Beach. Not a bad kitchen! The tide was going out at this point. During a high tide the rocks on the beach can’t be seen. If you look closely you can see my ground sheet. That’s where I rolled out my swag. 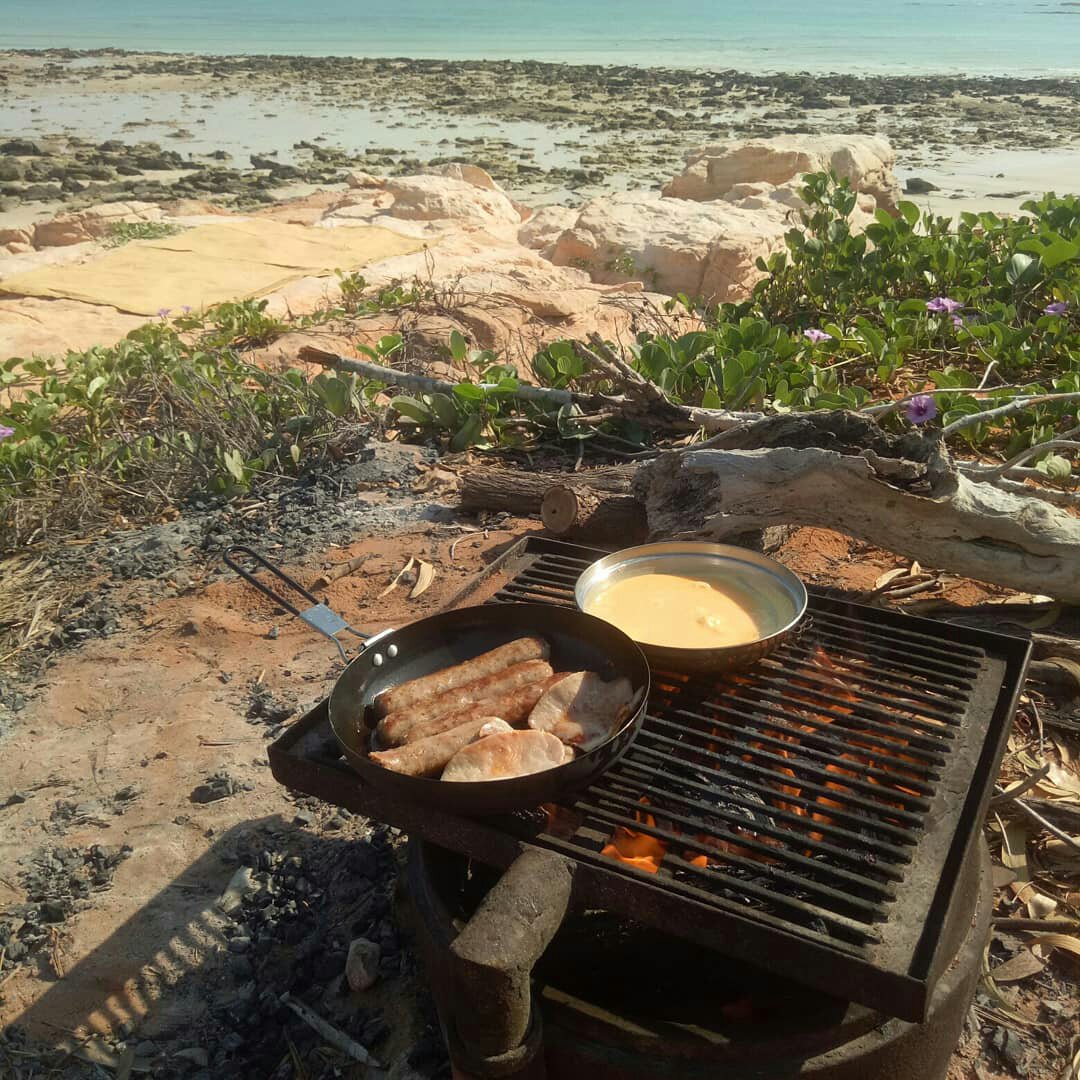 And how’s this for my bedroom! I often roll my swag out and sleep under the stars. I have to admit this bedroom will be hard to beat. In the far right of the photo you can see the sun coming up. The Dampier Peninsula has the best sunrises I’ve ever seen. (Darwin has the best sunsets, btw.)

It’s dubbed the Dampier Peninsula’s best kept secret and I absolutely agree! Gumbanan is about twenty minutes drive east of Kooljaman (close to One Arm Point), and a camp site there is fraction of the cost. For $15 I camped in the most delightful spot (see below). Ridiculous, eh? The bathroom and showers are just as basic as Kooljaman but they do they job nicely. And I didn’t shower or pee alone. There were green tree frogs to keep me company.

I slept in my swag in the back of my Hilux. Heaven really is a great view from a $15 camp site.

The tides are pretty incredible in the north. I sat and watched the tide come in and go out from my camp. Check out the difference in just a few hours!

And a different tidal point of view: Just magic! 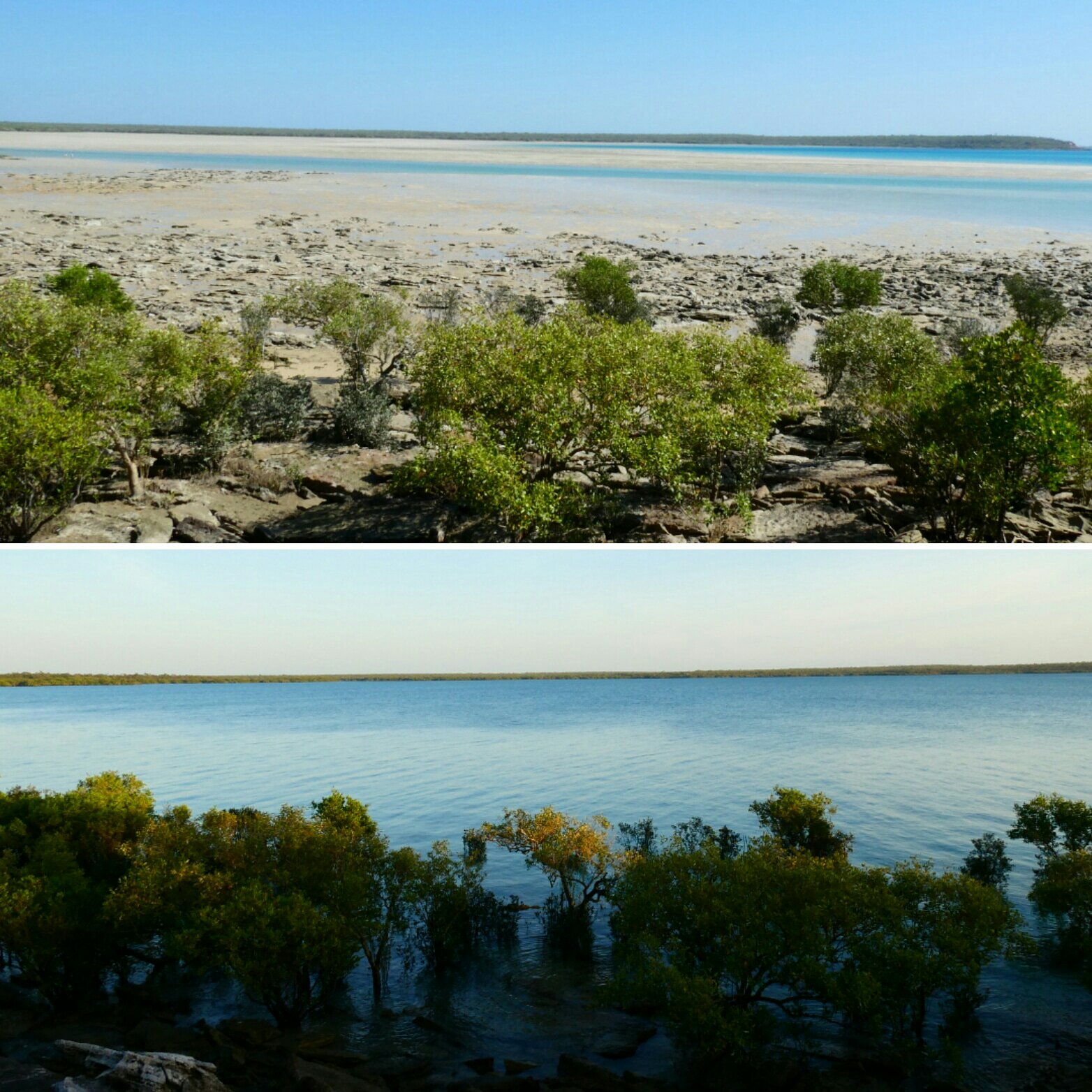 It’s a pretty easy place to pour yourself a drink and watch the tides and the wildlife go by. While it be warm in September (the start of what’s called the build up) there’s usually a sea breeze to cool you down. Gumbanan is no exception.

YOU NEVER KNOW WHAT YOU’LL SEE

Feral donkeys aren’t uncommon on the Peninsula. You’ll see their calling cards on the road and, if you’re lucky, you’ll see some. 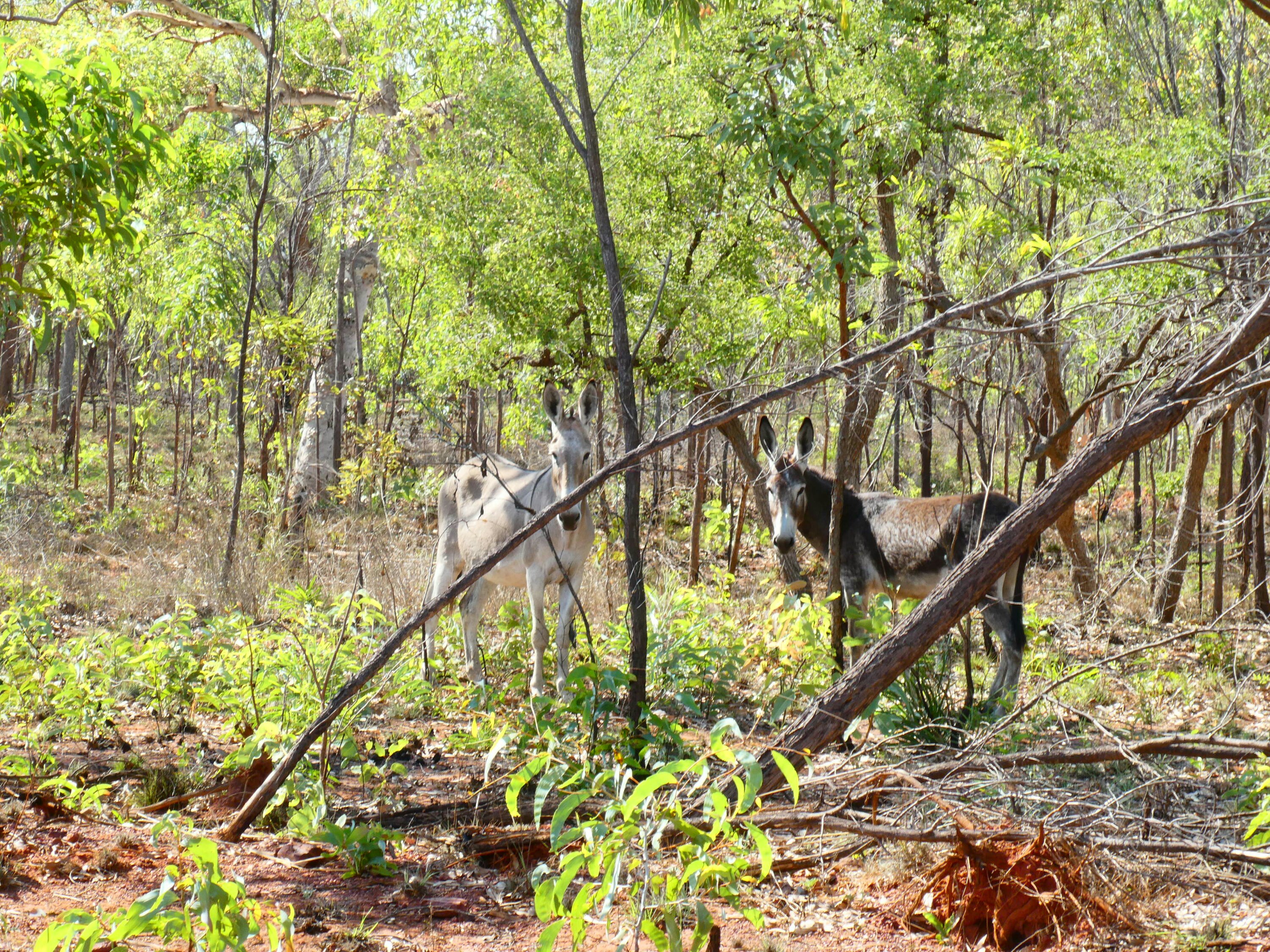 Another gem of a place on the Peninsula! Again, I was there out of season. And look what I saw from near where I was camped! I was up pre-dawn and saw a whale from my swag. On closer inspection she had a new-born calf with her. More magic!

This German tourist Lars was camped beside me so when I saw the whales in the bay we jumped at the chance for a closer look. After a couple of hours of whale watching (yes, hours) Lars went snorkeling and this very active whale made a bee-line for him (photo below). I was watching it all unfold from land. Check out this video I took. The drone vision isn’t mine but the other shots are. 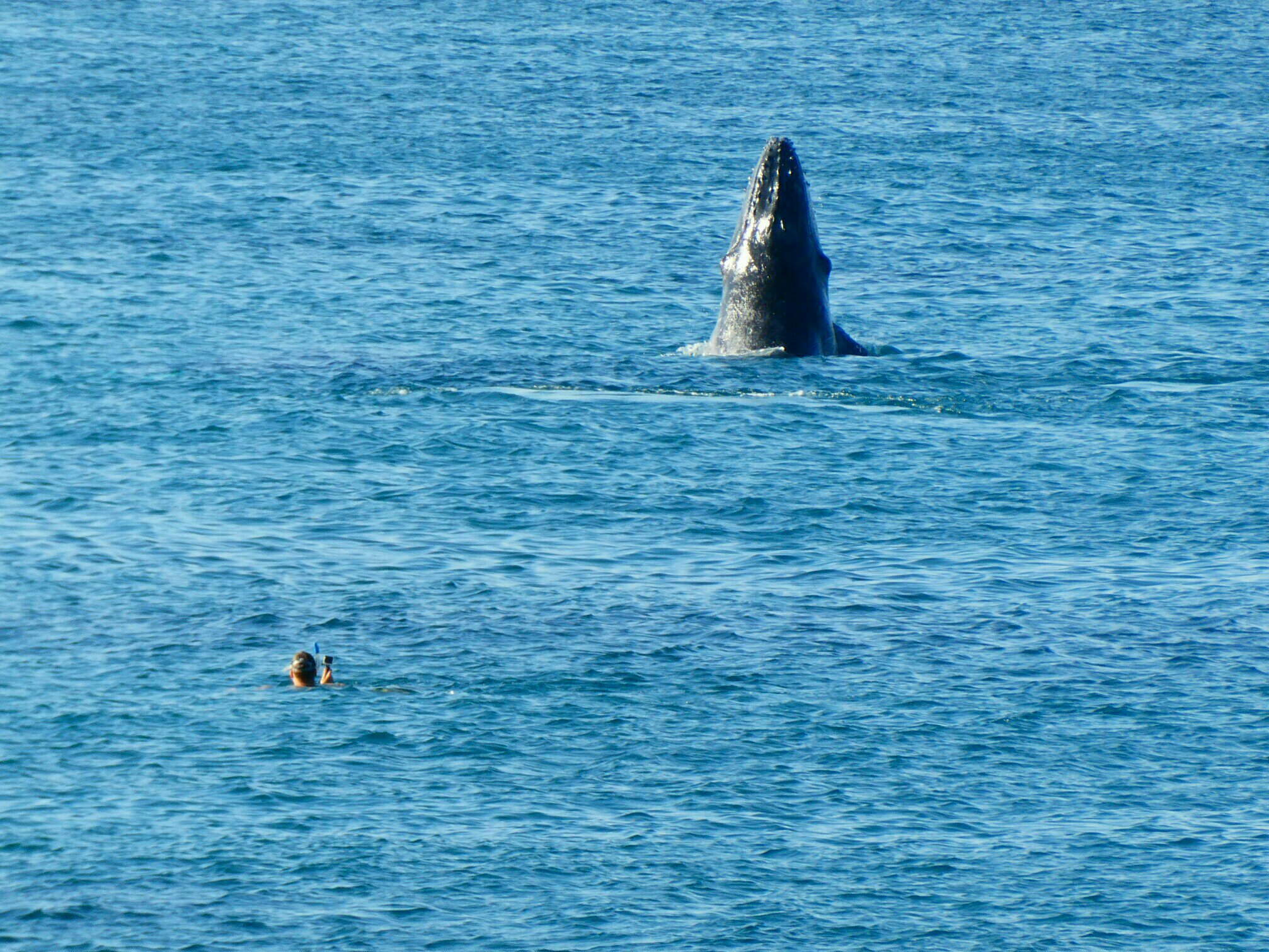 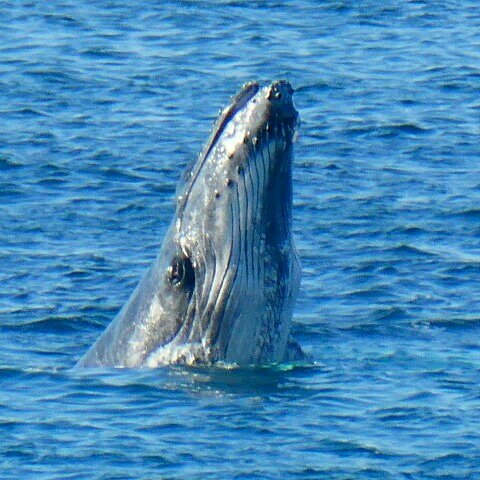 Middle Lagoon has both unpowered campsites and cabins. Of course, I was more than happy with my $15 campsite (low season price). This photo was taken at an almost-low tide. 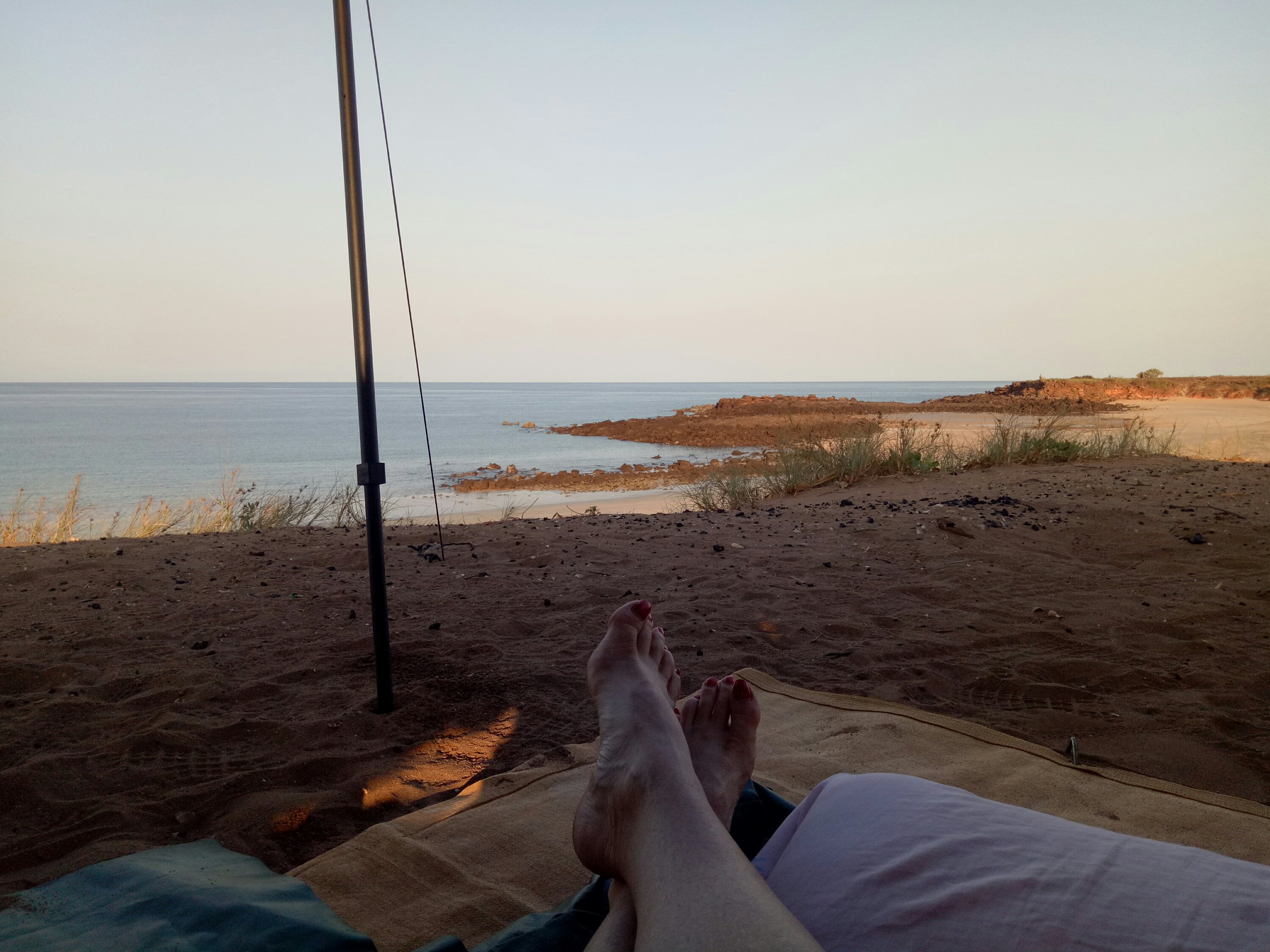 The Dampier Peninsula is a most worthy detour if you’re around Broome. Sadly plans are afoot to bitumen the rough Cape Leveque road, making the Peninsula’s communities more susceptible to grog running and drugs, and providing much easier access for tourists to the Peninsula’s relatively unspoiled environment. The Peninsula’s beauty lies in its unspoiled simplicity. An influx of people and a lack of planned infrastructure to cope with those increased numbers threatens that.

I’ve mentioned just some of the great camping spots. There are quite a few more. And there’s also the Cygnet Bay Pearl Farm which is a great place for lunch and a swim (See below. That’s me on the left. Tough gig, right?) It also offers a range of accommodation options.

The Dampier Peninsula is a very, very special place – one of my favourites. You’ll need a four-wheel drive to get there.  And it’s probably best to put your tyres down a bit. The road can be very corrugated in parts and sandy in others. 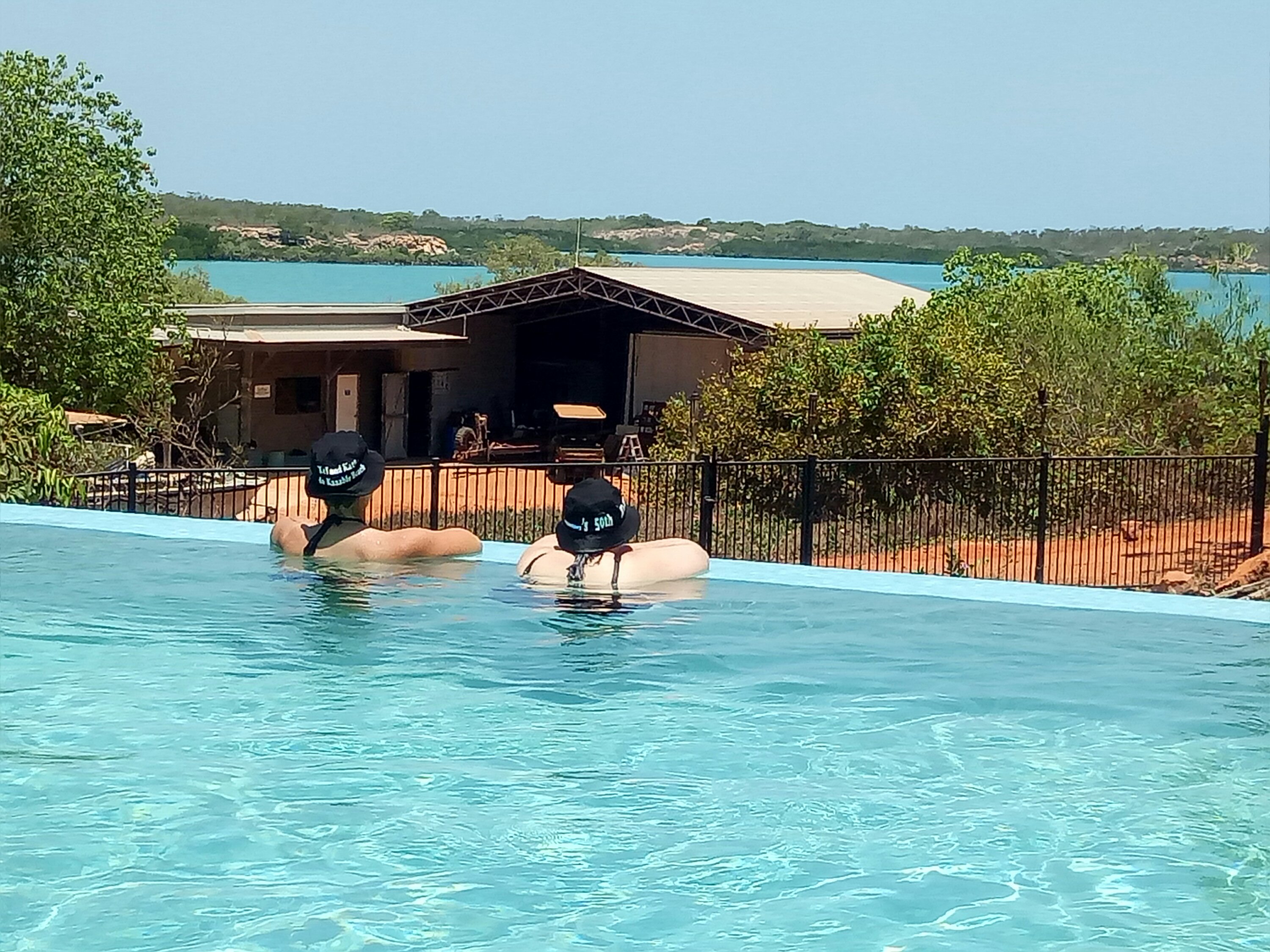 Oh, and take your rod if you’re going camping. The Peninsula’s got great fishing!

Lisa Herbert is houseless not homeless. She’s the author of funeral planning guide ‘The Bottom Drawer Book: an after death action plan’ . She’s been travelling around the country for about four years, occasionally filling short-term contracts for the ABC in places like Kalgoorlie, Broome, Tamworth and Darwin. Lisa enjoys blogging about the unusual graves, memorials and cemeteries she finds on her travels.
Get in touch with Lisa via Facebook .